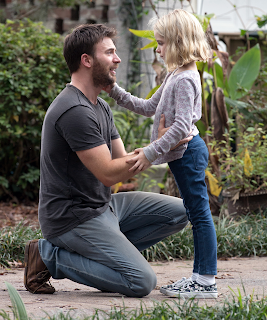 I confess that when I went to a screening of the new film, Gifted, last week, I expected to be frustrated and disappointed. Gifted kids are often portrayed in TV and movies as either social misfits to be laughed at or mini adults and phenoms to perform for our amazement and amusement. Stories about gifted kids tend to be simplistic. "Gifted schools" have nerdy kids with thick glasses, no recess and chess clubs as the only activity. Putting them at a regular school with "normal" kids is the way to make gifted kids "normal."

Gifted took a nuanced look at the challenges of raising a profoundly gifted child, exploring the idea of how you provide a childhood to a gifted kid.  What does "normal" really mean?   Mary's caring Uncle Frank wants her to be a kid. He doesn't deny that she has extraordinary intellectual gifts.  In fact, he continually challenges her intellect, engaging in philosophical discussions and supporting her passion and ability to learn increasingly advanced mathematics. He recognizes that that learning is her joy. But he also understands that she is a kid. He wants her to run, play and ride a bike and do all the things that kids do. He tries sending her to first grade, where her age would place her. It is immediately obvious that she doesn't fit in. She is incredulous that the other 7 year olds are learning simple one-digit addition. She calls them "aliens" because their way of seeing the world is so different from hers.

Her grandmother, on the other hand, believes her enormous potential is a responsibility. Her family owes it to the world to develop her immense mathematical potential. If that means she has to forgo being a child to get serious about her studies so be it.  It's the sacrifice she has to make because of the gifts she's been given.

Dr. James Delisle, scholar and leader in gifted education notes that gifted kids, "...are normal – they just aren't typical."  Often, however, when students enter school, the fact that they aren't typical can make them believe they are not normal.  Or that in order to fit in, they have to give up learning new things at school and to focus on making social connections.  Unfortunately, this often leads to kids who find, like the girl in the film, that they don't fit in academically or socially.  They either have to hide what they are truly capable of, or look to teachers and other adults to be their friends.

This is a choice families shouldn't have to make for their gifted kids.  And, frankly, it is the reason Seabury exists. Not all 7 year olds are the same, and not all need the same things at the same time. In specialized programs for intellectually advanced youngsters, kids can be kids and can reach their potential at the same time.  Bright 4 year olds can have deep conversations about whether Pluto should be a planet as they play with blocks and learn to share.  Kids who lose sleep over climate change can laugh with their friends at the exploits of Captain Underpants.  Teachers don't shut a student down who has a different way of doing the project that has been assigned. Kids who have a million questions are with peers who inspire a million more.

In gifted education, we call this asynchronous development – kids who are developing intellectually, socially, emotionally and physically out of sync. They are many ages at the same time. An 8 year old might do math like a 12 year old, read like a high school student, have the physical coordination of a 9 year old, and have the imagination of a much younger child.  Because gifted students have the tendency to be highly sensitive and intuitive, when they are in an environment, like Seabury,  where other students and teachers understand them, they feel safe asking tough questions and revealing their sensitivities. As educators and parents who want our kids to become all they are capable of becoming, we need to pay attention to all these ages and stages of development.  We need to provide supports where they are needed, and remove the artificial ceilings in the areas where youngsters are ready to fly. 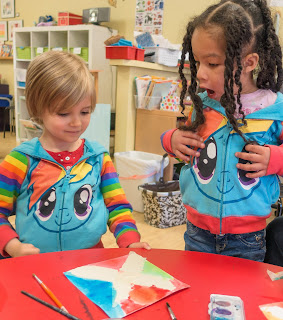 Parents shouldn't be forced to choose between social happiness and academic
challenge. At Seabury, students don't have to choose between being intellectually challenged and being in a social environment that works for them.  They can be normal, even when they aren't typical.

I encourage parents of gifted children to see the film. Because it's Hollywood, young Mary possesses gifts that are extreme. Most gifted students are not doing differential equations at 7 years old. But they are doing things beyond the reach of typically developing kids their age. Notice how the child struggles to make sense of a first-grade curriculum that covers material she's known as long as she can remember. Bring tissues, it's not easy to watch the little girl understand for the first time how different she is, or her uncle as he agonizes over the best choices for her.

Over the years, Seabury parents have frequently expressed – sometimes in tears – how grateful they've been to have their children in an educational setting where they can still be kids and also experience work that challenges them.

Seabury exists to allow for children to be fully who they are – intellectually, physically, socially and emotionally – 100 percent of the time.

Supporting the Emotional Needs of the Gifted (SENG)

Founded in 1989, Seabury is the only independent school in the South Puget Sound with a program specifically designed for intellectually advanced children. Children from Tacoma, Federal Way, Kent, Auburn, Gig Harbor, Puyallup and throughout the South Puget Sound region come to Seabury for its personalized approach to education and emphasis on the development of creative and analytical thinking skills. Seabury is a member of the Northwest Association of Independent Schools (NAIS) and the Northwest Association of Schools and Colleges (NASC).

Seabury School challenges gifted children in a community that cherishes each individual and fosters a love of learning, discovery and creativity.